Quake and the Ultimate Doom Compilation 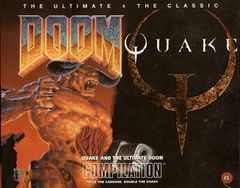 The compilation includes both The Ultimate Doom and Quake on CD-ROM. Both products are each on their own disc, and both include their respective Windows 95 editions (Doom95 in the case of the Ultimate Doom, and WinQuake) alongside the original DOS versions of the games. Some releases of the compilation were bundled with a jewel case copy of the Malice for Quake total conversion.