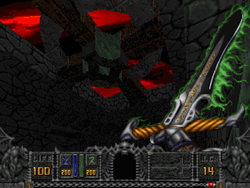 The Quietus depicted in a pre-release screenshot. 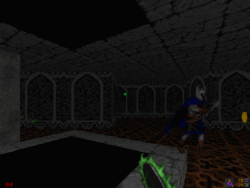 Traductus confronted with the Quietus in his tomb.

The Quietus is a weapon from Hexen. It resembles a longsword with a fiery green aura, and is Baratus the Fighter's final weapon that can be retrieved in the game. The Quietus, like the fourth weapons for the other classes, is in pieces. The three respective pieces—hilt, cross and blade—must be collected before the weapon can be used.

When assembled, the Quietus shoots a barrage of five green magical swords which deal moderate damage on their own and explode on impact for more damage. The arc of the projectiles angles slightly to the left. The Quietus requires 14 mana of each kind to use, making it the least mana-consuming of the ultimate weapons.

The Quietus lacks a melee attack. Despite this, the Quietus is most effective at close range, as it ensures all the projectiles connect successfully.

The manual states that most monsters will willingly give up their souls if hit by the Quietus.

In the IWADs the Quietus hilt is first encountered on these maps per skill level:

The Quietus cross is first encountered on these maps:

The Quietus blade is first encountered on these maps:

The IWADs contain the following numbers of Quietus hilts per skill level:

They contain the following numbers of Quietus crosses:

They contain the following numbers of Quietus blades: