RRWARD01 is a single-level PWAD for Doom designed by Richard R. Ward and released in July 1994. It uses the music track " " and includes the title music track " ". A Doom II version was later released as RRW_D201. 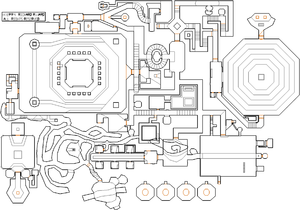 Map of RRWARD01
Letters in italics refer to marked spots on the map. Sector numbers in boldface are secrets which count toward the end-of-level tally.

This WAD features three built-in demos, of which, in the author's words, "the third actually pertains to this map. ;)". All require Doom v1.2 to view them. The demo levels are:

* The vertex count without the effect of node building is 2588.