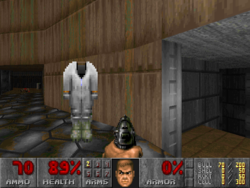 One of a few radiation shielding suits in Doom E1M4: Command Control. 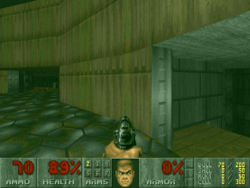 A view of E1M4: Command Control while wearing the radiation suit, with the distinctive green haze.

The radiation shielding suit (shortened to radiation suit in the manuals) is an item that appears as a white hazard suit. Picking one up will make players immune to damaging floors, except for floors with sector type 11, for 60 seconds and fill their vision with a green haze. When 5 seconds remain, the green haze will begin blinking, signaling the end of the suit's effects. The suit has no armor value and does not protect the player from monster attacks in any way. Picking up one radiation suit while another is still in effect does not shield the player for an additional 60 seconds, but merely resets the protection time to 60 seconds (for instance, in E3M7: Limbo, the player may inadvertently run into additional radiation suits while navigating the blood tunnels).

The effects of a radiation shielding suit can also be obtained with the cheat code idbeholdr.

For the 20% damaging floor types, there is a small chance (6/256 ≈ 2.3%) every 32 tics ( ≈ 0.91 seconds) that the hazard will penetrate the protective suit and inflict damage as normal. This is unlikely to occur more than twice during the lifetime of a given suit.

This item is not included in the items percentage displayed at the end of each level.

In Doom 64 the radiation shielding suit is renamed the Radiation Shield and the sprite is changed from a hazard suit to a glowing biohazard artifact. However, its beneficial effects remain the same.

In the IWADs the radiation shielding suit is first encountered on these maps per skill level:

The IWADs contain the following numbers of radiation shielding suits per skill level: