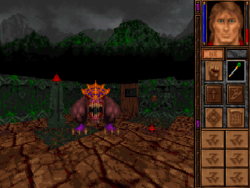 Shadowcaster is the flagship game for the Raven engine.

The Raven engine was an intermediate game and rendering engine created by John Carmack in late 1992, which grew out of his then-ongoing research for the upcoming Doom project. It is primarily based on the Wolfenstein 3D engine, and is still restricted to use of levels based on a fixed grid of cells, but includes significant advancements shared with Doom. It is technologically similar to the engine used for Rise of the Triad, which is also a hybrid of Wolfenstein and Doom technologies, though the degree of their relationship is not entirely known.

John Carmack stated that the engine was "about half as fast as that of Wolfenstein," but this was acceptable given its initial purpose - the game engine was initially created as a favor to Raven Software, to power their new hybrid dungeon crawler/first-person shooter game, Shadowcaster. It was additionally provided to Softdisk, with rights to fully exploit and sublicense the engine, as part of id Software's agreement upon their official severance as employees of that company.

Later games based on the engine added significant additional enhancements and in some cases neared complete rewrites. The Raven engine itself, much like Ken Silverman's BUILD, is primarily a renderer, and so little of the game code is shared in common between the various games which use it.