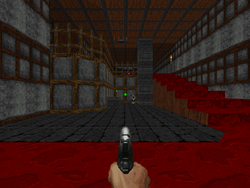 Mickey's troubles begin the moment he enters his childhood home.

Realms of Dr. Chaos is a map set for ZDoom and Heretic released by Mike MacDee (Impie) in 2018. It is very loosely based on the NES game Dr. Chaos, mainly in its plot about the main character rescuing his brother Dr. Chaos from his own ill-advised forays into interdimensional travel.

The wad consists of 3 maps centered around puzzles and exploration. The player is required to enter various extradimensional realms and puzzle out the central goal of each in order to reach a key, switch, or other objective. It also includes a .45 pistol which replaces the elven wand, and replaces the Ophidians with much deadlier Serpathor snake women.

Bungalow of Dr. Chaos Mickey Chaos has returned from the Great War to find a letter from his brother Mortimer, a mad scientist who has infested their childhood home with unstable doorways to alternate dimensions. Mickey must explore the house and three alien worlds in order to close the doorways and stabilize the space-time continuum.

Dr. Chaos Strikes Back Mickey discovers his brother Dr. Chaos has turned their new Turkish bath business into a giant extradimensional engine, used to deliver water to the world of New Babylon. When the engine becomes predictably unstable, Mickey stops by to shut the bath house down and save the day.

Originally made for the 20 Heretics project, the map proved too large for a mere 20 monsters, and was pared down for that collection, with the full version included in Realms.

City of Chaos While on a drunken holiday in Norway, Mickey agrees to pick up a strange reality-bending artifact for Dr. Chaos known as the Aeon Scythe, which Mickey promptly breaks, shattering the city of Dander into multiple perverse timelines. He must explore each timeline to find the missing pieces of the device in order to restore reality, and hopefully return to his own timeline.

The elven wand has been replaced with a Colt M1911 pistol, which fires faster than the wand and does more damage. However, it cannot harm spectral enemies, and being mechanical in nature, it is not affected by the Tome of Power.

Because the Ophidians are not very threatening, Impie replaced them with the Serpathor from Karnak. It is a snake woman armed with a Phoenix Rod and a medusa beam that temporarily slows the players movement, making him easier to target. Serpathors are now the deadliest enemies in the game apart from the boss monsters, and should be approached with caution.

The music is all sampled from the mid-90s PC game Bad Mojo, composed by Xorcist.