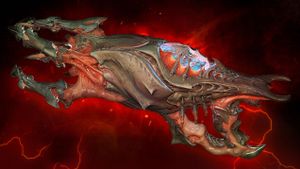 The reaper in profile.

The reaper is a multiplayer-only weapon in Doom (2016), originally added to the game in the second DLC expansion, Hell Followed. It is a demonic weapon recovered from Hell by the UAC and consists of a seemingly organic shell inside which a skull-like soul (somewhat similar to a lost soul) can be seen to act as the weapon's energy source. The front end of the weapon has four claws which are normally spread apart, but can contract together to focus the weapon's energy when it is charged. The weapon features a vaguely insectile appearance, especially on its back end, which resembles an arthopod's cerci. The skull inside the weapon is covered by a thin transparent membrane, and its aura changes from blue to orange when the weapon is fired.

The demonic troopers seen in The Ancient Gods, Part Two wield these weapons, but fire single red fireballs instead of bursts. 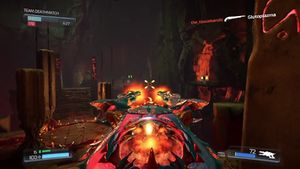 The reaper being charged.

The reaper has two firing modes. Its primary mode releases a quick burst of six compact plasma-like orbs of Hell energy and has a high rate of fire, with almost no recovery between bursts. The secondary mode allows the weapon to be charged up for a slower but more powerful attack. This secondary mode fires a laser-like stream of Hell energy which strongly resembles the attack of the Unmaker from Doom 64.