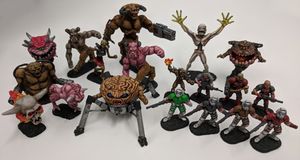 A line of miniatures was produced by Reaper Miniatures based on Doom and Doom II characters in a limited run from September 1997 to July 1999. The original miniatures were carved by three freelance artists contracted by Reaper: Sandra L. Garrity, Julie Guthrie, and Bob Ridolfi. Sandra carved nine of them, Julie two, and Bob four. Reaper part numbers were 66601 through 66615, in respective order below. The miniatures were produced under a license from id Software. The line featured the following miniatures: 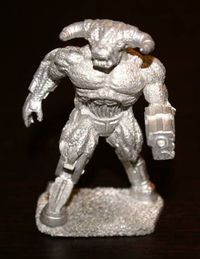 In addition to the published line of figures, two extremely limited prototypes of the cyberdemon miniature were also cast. Neither were ever released to the public market as they were rejected by id Software during the miniature line's approval process due to being too small and having a pose they did not like. According to Ed Pugh, co-owner of Reaper Miniatures, 15 to 20 pieces of each prototype exist worldwide. One each of the two prototypes were given to all then-current id Software employees, and over the years a small number of those have found their way onto the open market.

The arachnotron was also originally rejected by id Software as the brain was not round enough, among other small issues. Unlike the prototype cyberdemon, only one unit of the rejected arachnotron design was ever produced. It sat in the office of David Pugh, co-owner of Reaper, until April 2010, at which time it was acquired by a private collector.

An extremely limited number of sample pieces which lack a date stamp and copyright text are known to exist; one such sample baron of Hell piece was discovered by Doomworld Forums user Peckpeezy in an antiques store in Texas in 2014.[1]

Three of the miniatures—the baron of Hell, mancubus, and demon—were offered again as Doom 3 pre-order bonuses. GameStop, EB Games, and Best Buy each had one as its own store exclusive. Best Buy also offered its miniature separately online for US $10 for those who did not wish to pre-order the game. 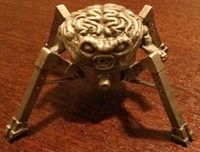 A new batch of the Doom Reaper miniatures was sold in 2013 on the online Bethesda store as part of the QuakeCon 2013 celebration of Doom's 20th anniversary.[2] These were sold for US $200 in the form of a boxed set containing one of each of the 15 figures. Pieces from this run have "2013" as the copyright date on the bottom of the figures.

The 2013 arachnotron differs from previous runs, and it is believed that the "beta" mold was used in its production, possibly due to the original production mold being in an unusable condition. Differences include a flatter brain; fewer, larger cortical folds on the brain itself; a shorter plasma gun barrel; and lack of detailing underneath the barrel that is present on the 1997 piece.

The hard shell box used for the set is a Condition 1 #699 pistol case. Reaper Miniatures use this case for all of their boxed sets and this is not specific to the Doom set (it is possible to buy identical empty cases from Reaper with a generic Reaper Miniatures label).

The boxed set attracted criticism from some Doom fans due to the way that the figures are packed within the box.[3] The figures are stored in a standard miniatures box in a foam grid, but the box was clearly designed for smaller figures, as some of the larger figures do not fit properly within the small grid spaces. Some of the foam is cut away to accommodate the largest figures (specifically the cyberdemon, arachnotron and arch-vile). The end result is a sloppy, unattractive appearance to the set (see picture below). Fans have developed a design for a replacement foam sheet customized for the figures that can be laser cut.[4]

A limited run of another full collector's set of the miniatures was again offered by Bethesda for US $200, with pre-orders opening silently on the Bethesda Gear store in December 2018.[5]

Issues with the previous set were addressed:

Pieces from this run again have a 2013 copyright date on the bottom (including the arachnotron) attributed to Bethesda Softworks, LLC, and state the name of the piece along with "Mfg. USA by Reaper". Pieces in this run have a much darker appearance with greater patina.

Despite the "Mfg. USA" text on the pieces, the box states the place of manufacture as China, and credits Development Plus, Inc. of Novato, California as importer.