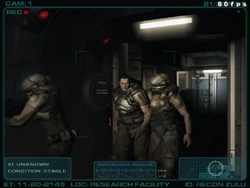 Recon Zulu was the Marine team from Earth which rescued the player at the end of Doom 3. The team consisted of several Marines and at least two sentry bots.

When the fleet from Earth arrived at Mars in response to a distress call (sent by either the protagonist or Dr. Malcolm Betruger), Recon Zulu was one of the first teams sent to the planet's surface to investigate. Upon entering Delta Labs, they found the entire facility in ruins with all its personnel dead. Even more disturbing, words like die, burn, and suffer had been scrawled on the walls in blood. One of the Marines commented, "This place looks like Hell."

Recon Zulu eventually located a single survivor: a lone Marine. He was exhausted, but relatively unhurt. Recon Zulu quickly evacuated him off the base. They also found Counselor Elliot Swann who was dead. The marines looked for Dr. Betruger, but found no sign of him. Unbeknownst to them, Betruger was in Hell and had been transformed into the Maledict.