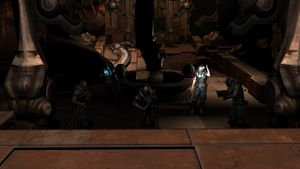 Red Team was a Marine search team assigned to investigate Site 1 under the supervision of Dr. Elizabeth McNeil in Doom 3: Resurrection of Evil. They were armed with plasma guns. Finding that there is a previously unrecorded chamber behind a rock wall, they request an explosive charge be placed to access it. One member places the charge, which blasts through the rock, revealing an area with especially strange Ancient Martian architecture. The member who placed the charge checks inside an inner chamber and sees the Artifact. Upon touching it, a shock wave kills most members of the team.

A cutscene then takes place in Hell, where the Maledict (the new form of Malcolm Betruger at the end of Doom 3) reveals that the Artifact being taken has freed the demons from their imprisonment once again. Ordering the three Hell Hunters to hunt down the Artifact, a new demonic invasion of Mars City begins.

Members of Red Team use a different helmet type than the marines seen previously in Doom 3.