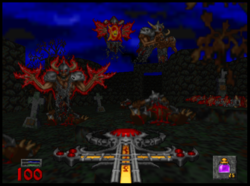 Reivers appear in large numbers in the Necropolis

The reiver is an enemy in Hexen. It is a levitating, rotting corpse with the lower half of its body gone, and it wears chainmail and a horned helmet. Each reiver possesses 150 hit points, somewhat less than an ettin but more than any of the other airborne monsters save the death wyvern. According to the manual:

"Although they retain only half of their bodies, these Undead creatures have lost none of their powers. They fly through the air with hypnotic grace, but don't just sit there and watch or they'll pelt you with devastating fireballs."
― Hexen instruction manual

The reiver is able to fly, and drifts up and down as it moves. It shoots powerful lava balls from a distance and also leeches health from its enemies as a melee attack, allowing the reiver to gain more health than it started with. It can start out either above ground or buried underground; if the latter, there is a period of vulnerability as it arises when it can be hit before getting a chance to attack. Although they move rather slowly, reivers are not to be underestimated. Their ranged attack is easier to dodge than that of a dark bishop but it is highly damaging if it connects, and their bobbing movement can make them difficult to target at longer distances.

Reivers can be gibbed, but unusually, their normal death is to be vaporized into a red haze, while their gibbing death leaves behind several dismembered, but recognizable, body parts.

In the IWADs the regular reiver is first encountered on these maps per skill level:

The IWADs contain the following numbers of regular reivers per skill level:

The buried reiver is first encountered on these maps:

The IWADs contain the following numbers of buried reivers: