Requiem (REQUIEM.WAD) is a 1997 megawad that contains 32 new levels, uploaded to the idgames archive on July 4, 1997. Several of its designers previously worked on Memento Mori and Memento Mori II. It is famous for popularizing architectural tricks that are used even today, including the faked 3D bridges originally introduced by Dystopia 3. It is also one of the few PWADs that are allowed to be used in Compet-n speedruns.

A custom soundtrack is included as a separate music pack file, REQMUS.WAD. It was composed by Mark Klem, David Shaw and Jeremy Doyle. In 2018, this soundtrack was arranged into a studio album with live instruments and high-quality VSTs, called Requiem Reimagined.

The project was moderated by Chris Thornton. According to Adam Windsor, Requiem was first conceived as "the last great megawad for Doom", hence the title's reference to a requiem mass, as Doom was seen as "dying" in obsolescence after the release of Quake brought true 3D to the first-person shooter genre.[1] During development, there were strict rules in place about which enemies and weapons could be used on which maps, in order to ensure proper difficulty progression and that every map felt different from each other.[2] For texturing, however, the only rule was that the textures created by Anthony Czerwonka for his MAP24: Procrustes Chambers were exclusive to that level and not allowed for use on any other.[2]

Each level submitted to the project was posted on its mailing list, where, in theory, they could receive playtesting feedback from the rest of the team.[3] In practice, however, only MAP23: Hatred received any real testing feedback,[3] in the form of complaints about its use of Wolfenstein SS and the final boss.[4] This led to a number of glitches creeping into the final product, most notably an elevator on MAP08: The Reactor where the player can get stuck and become unable to escape without the noclip cheat.[3] The mailing list overall saw little, if any, conversation.[5]

The alleged slow death of Doom that inspired the project also hindered its development.[1] After submitting MAP10: The Black Gate, Orin Flaharty did not respond to emails sent by Chris Thornton when Thornton found during compilation that his copy of the level was corrupted, requiring Adam Windsor to create a new ending for the map after nobody could find a functional version.[6] More notably, the project spent such a long period of time with four maps missing that Chris Thornton announced he would either release Requiem incomplete or cancel it (it is unclear what he intended), requiring Windsor to contribute three levels intended for Demonfear and quickly make a small one for MAP32.[7] Even this was not immune to errors: the titles and information for two of these levels, MAP25: Chaos Zone and MAP26: Excoriation, were mistakenly swapped during compilation.[8][9]

When finally released, Requiem's text file described it as "SOMETHING LIKE A PUBLIC BETA" of the WAD.[10] It is followed by a message reading, "IN CASE YOU FIND A BUG - TELL US - IN CASE YOU DON´T ITS [sic] THE FINAL VERSION ;) !"[10] 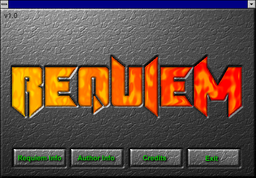 The main menu of the infopack, run in Windows 3.1 using a 24-bit color display. The graphics will be dithered if run with a 16-bit display.

As with Memento Mori and Memento Mori II, Requiem has an "infopack" available separately from the main WAD. As with the other infopacks, it takes the form of a program; in this case, it is a 16-bit Windows application. As a result, it will not run in 64-bit versions of Windows without emulation or the use of a virtual machine. It was created by Chris Thornton and Thomas Möller with the unregistered version of the Formula Graphics Multimedia System; because of this, a splash screen for Formula Graphics will appear before the infopack program starts.

When the infopack is opened, thunder is heard and four clickable buttons will appear one at a time along the bottom of the screen: Requiem Info, Author Info, Credits, and Exit. After this, Mark Klem's "The Everlasting Negative", the music of MAP21: Den of the Skull, will begin playing. This startup sequence, including sound effects, will repeat every time the main menu is accessed. Requiem Info provides information on all 32 levels, including screenshots. The user may select a level number from a grid of buttons to see info on that level, and then page between sections about other levels like the pages of a book. The Author Info displays the names of each member of the team, which can be clicked on to see information for that author, as well as a special "Thank You!" button that displays a message of "deepest thanks" from the Requiem team. "Credits" is a single section that features the level designers; the graphics designers; the musicians; and "Greetings and Thanks" to moderator Chris Thornton, to homepage designer Rhys Hughes, to Doom II creators id Software, and to Harrow Software for "granting us the profit-free use of FORMULA [sic] unregistered."

The infopack may also display other special effects depending on the color depth used when running it. With 24-bit color, the main menu comes in two halves that connect from the top and bottom of the screen, and the "Requiem" logo will be filled in with color from the middle. Accessing the information pages will result in the borders of said pages sliding into the window, with alternating rows of pixels sliding in from the left and right. Opening a level info page will cause its screenshot to gradually appear in sections like a rotating advertisement board. With 16-bit color, these effects will not be used and the graphics involved will appear instantly instead.

Despite the special presentation, the overall information content of the infopack is duplicated from Requiem's text file, including the "deepest thanks" message which appears at the bottom of said file.

This WAD features a full set of built-in demos. All three are complete playthroughs that achieve 100% Kills and Secrets. The credits do not list who recorded the demos, but given he is the author of each level, it was probably Matthias Worch. All demos require Doom II v1.9 for viewing. The demo levels and the demos' completion times are:

The Compet-n episode records for Requiem are:

The DSDA episode records for Requiem are:

The first demo only goes up to MAP03, as Xit Vono believed attempting MAP04 after the first three maps would be very difficult. In the second demo he finishes MAP04 as yet with 50% secrets.