Return of The Order

Return of The Order includes dialogues for six named characters and three unnamed peasants. The zip file also provides kaiser_13_b.wad that splits up the level into two maps for compatibility with the original Strife, but some problems remain. 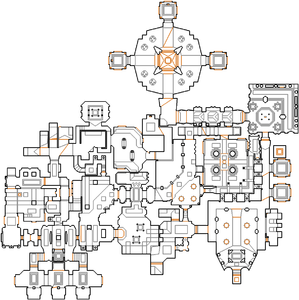 Map of Return of The Order
Letters in italics refer to marked spots on the map. Sector, thing, and linedef numbers in boldface are secrets.

* The vertex count without the effect of node building is 4181.