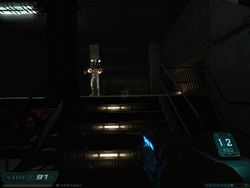 A single double-barreled shotgun blast in the head at point-blank range will kill one instantly (Resurrection of Evil and The Lost Mission only). It is possible, but not reliable, to kill the revenant with a single conventional shotgun blast aimed at its neck or the center of the clavicle. This is most likely to work if the attack is performed during its scream when it first recognizes the player and has its head leaning forward. The Machine Gun is also somewhat effective, although it takes some time and dodging. The chaingun and plasma gun are the most effective weapons at long range. The chainsaw is also highly effective against the monster, although the player will still take a few hits from its close-range punching attacks. The BFG is not recommended because of the likelihood that the projectile will hit the revenant's missiles in flight, not to mention that the rarity of BFG ammo against such enemies will make it a wasteful overkill.

Revenants start to appear in the middle levels. They are not too common in the original game, but they become one of the most common enemies in Resurrection of Evil.