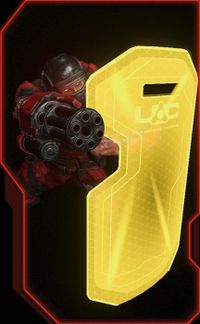 The riot soldier as it appears in the Codex.

The riot soldier is a monster introduced in The Ancient Gods, Part Two. It is a variant of the shield soldier that carries a chaingun, and can be identified by its red armor and golden shield.

The riot soldier's shield is indestructible, making it impervious to frontal damage; the chainsaw, which is capable of killing regular shield soldiers, cannot target riot soldiers while their shields are raised. The easiest way to kill a riot soldier is to launch a frag grenade or fire a rocket behind it; the rocket launcher's Remote Detonate mod is ideally suited for this task.

A faltered riot soldier can be hit with gunfire, but it will still be carrying the shield in its left hand so attacks from the right are more likely to connect.

Like other soldiers, the riot soldiers are humans who have been claimed by darkness. They march under the banner of the Dark Lord, carrying blessed shields raided from Urdak.