Rise of the Triad 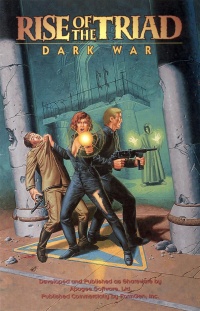 Cover art for Rise of the Triad

Rise of the Triad is a first person shooter game developed at 3D Realms, then known as Apogee, by a team under the direction of Tom Hall. The shareware version was released on December 21, 1994, with the registered version becoming available on February 17, 1995. It is notable due to the close relationship between the development team and id Software, and due to it being considered one of the games to truly stand out amongst the then so-called Doom clones as a true competitor and rival, receiving overwhelmingly positive reviews and maintaining an enduring legacy.

The lead designer and creative director of Rise of the Triad was Tom Hall, and the game was his first project after Doom. He had been fired from id Software in early July 1993 due to differences in design philosophy. He immediately started working on Rise of the Triad, and had written the original design document by November of the same year.

The game was initially meant to be an official sequel to Wolfenstein 3D, appropriately called Rise of the Triad: Wolfenstein 3D Part II[1]. Apogee had licensed the Wolfenstein engine for the game, but the development team added many features to the game, among others fog, dynamic lighting simulation, room-over-room, jumping, gibbing, skyboxes and so on. The major drawback of using the Wolfenstein engine was the lack of a z axis, a technical limitation that resulted in maps with no height differences, and a grid-cell-based world with strictly 90º angle architecture.

Tom Hall brought many design elements and ideas with him from id Software. Having been the lead designer for what was intended to be the retro-prequel, Wolfenstein 3D, he originally planned to migrate many of the features he designed into Wolfenstein, such as push walls to obtain secrets and bonus point items.

The continuous world design feature Hall argued for inclusion in Doom was also originally intended to be included in Rise of the Triad. Hall also worked the characters from his Doom Bible into the game.

Rise of the Triad contains code taken from Wolfenstein 3D, as well as early versions of the zone memory and WAD file systems from the Doom source code. It also makes use of an early version of Doom's patch_t image format which is close to that used in the press release beta version, indicating that Hall's team was given access to an early transitional source base, perhaps related closely to other contemporary games using the Raven engine, such as Shadowcaster.

Oddly, the same zone and WAD file code, further modified, also found its way into the source code for Duke Nukem 3D, possibly in violation of its original licensing terms. id Software is not known to have ever taken any legal action in regard to this, however.

When Doom was nearing completion, John Carmack revoked the license and changed the licensing terms to the extent Apogee could not market the game as a Wolfenstein sequel, purportedly to lessen the impact Rise of the Triad would have on Doom sales. The development team thus had to scrap most of the work done to that point and redesign the game as a stand-alone shooter.

The Doom source port 3DGE is working on support for Rise of the Triad.