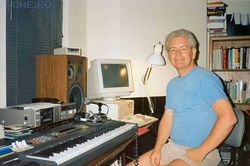 Prince at the id Software offices in 1992.

Robert Prince, also known as Bobby Prince, is a composer and sound designer. He has worked as an independent contractor for several gaming companies, most notably id Software and Apogee/3D Realms.

He has created music and sound effects for Commander Keen installments 4 through 6, Cosmo's Cosmic Adventure, Catacomb 3D, Wolfenstein 3D, Spear of Destiny, Blake Stone: Aliens of Gold, Rise of the Triad, Doom, Doom II, Duke Nukem II, Duke Nukem 3D, Abuse, Demonstar, and other games. He has also composed music for commercials and independent films. In 2006, he was given a Lifetime Achievement Award by his fellow game composers. Though occasionally describing himself as retired, Prince has done recent work, including compositions for Brad Carney's 2014 Wrack.

Prince created the score for both Doom and Doom II. Prince was never an in-house composer for the projects. Him being isolated from the office allowed him to explore the score without input from the development team, and caused him to find much inspiration from the Doom Bible, the design document written by Tom Hall.

"What helped the most with the sound in Doom was the Doom Bible that Tom Hall compiled," says Prince. "Much of what was in it never appeared in the game, but it set a mood for starting on the project. Within a few months of receiving that document, I had roughed out a lot of music and most of what turned out to be final sound effects."[2]

For inspiration Romero handed Prince tapes with what he calls "Tony Martin-era Black Sabbath", to serve as rough guides for "what we are looking for". Says Prince, "The id Software development team originally wanted me to do nothing but metal songs for DOOM." Consequently the score reflects the then-current metal and hard rock genre, creating a instantly recognizable sonic landscape.

Prince originally envisioned Doom as having an ambient, environmentally sensitive soundtrack, rather than a traditional musical score. He initially created the metal-styled tunes to demonstrate that this style of music would not mesh well with the game, but they eventually ended up in the final product. Assigning the music to the levels was done by Romero.[3]