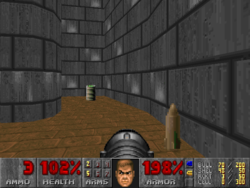 A rocket in the penultimate room of E1M5: Phobos Lab, in Doom, seen with the light amplification visor in effect. 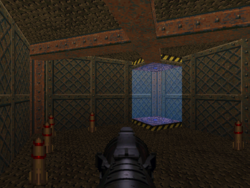 Several rockets in a room next to a teleporter in Doom 64 MAP05: Tech Center.

The rocket is a brown missile the player may pick up to use as ammo for the rocket launcher. Normally a single rocket, it becomes two at the I'm Too Young To Die and Nightmare! skill levels.

In the IWADs the single rocket is first encountered on these maps per skill level:

The IWADs contain the following numbers of single rockets per skill level:

The rocket appears in Doom RPG, with a somewhat different sprite. It gives the player either 1 or 4 rockets.