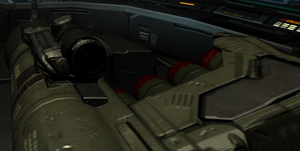 The rocket launcher.
This article is about the weapon in Doom 3. For other versions of this weapon, see:

The rocket launcher of Doom 3 is a weapon that is first found halfway through the single-player campaign, atop a shelf in the Recycling Sector. Ammunition is generally scarce until the player reaches Delta Labs, and is known to be particularly abundant in the Hell level.

"A portable self-propelled rocket designed for demolition and debris removal, this model has been modified for use as a military weapon."
― PDA description

Unlike the Classic Doom rocket launcher, which allowed for endless firing, the new rocket launcher loads from a 5-rocket clip. Its time interval between firing has also increased, limiting its ability to barrage opponents. Ammunition for the rocket launcher is in the form of 5 or 10 clips of rockets. The rocket launcher also does not have an electronic screen to serve as the ammo counter, unlike many of the other weapons which have been modified to include the aforementioned.

Like the earlier version, it carries highly-explosive rockets and reloads fairly quickly. The rockets travel only slighter faster then the plasma gun shots, but their effects are much more devastating; a single rocket can kill, even gib, a half dozen zombies grouped together.

As in Classic Doom, short range combat is dangerous if not suicidal, especially near ledges, since the blowback effect of the rockets is much stronger than before. Medium range combat is most effective with the weapon, with the physics engine sending enemies flying, often in several pieces. The slow speed of the rockets makes long range combat difficult, unless it is being used against a big, slow-moving target. Like rockets from the demons, your own rockets can be intercepted with weapons fire, though this rarely happens outside random coincidence.

In single player the weapon is most effective against Hell knights, though it can also be used in enclosed spaces successfully on cacodemons, revenants, and commandos, although tentacle commandos tend to dodge it, as can chaingun commandos if they are not firing. Perhaps the most effective use for the weapon is to kill Sabaoth; as the door opens, empty a clip of rockets into it. After reloading, simply use a fully charged Soul Cube, and you will send him back to Hell in under 20 seconds.

While it provides only minimal blowback in single player for rocket jumps, in multiplayer it makes a useful, if health-draining height booster for your jumps.