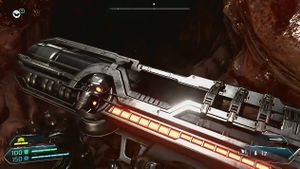 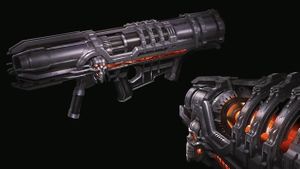 Concept rendering.
This article is about the weapon in Doom Eternal. For other versions of this weapon, see:

The rocket launcher, also known as the Paingiver, returns as a weapon in Doom Eternal. First revealed at QuakeCon 2018, it features an all-new appearance with a transparent barrel and a skull motif on its side. The weapon is found in the Cultist Base, just before the first encounter with the whiplash.

Compared to its appearance in the previous game, the rocket launcher fires more slowly and has slower projectiles but deals more damage and has a larger blast radius, making it more similar to the classic rocket launcher in terms of how it functions. The mods function similarly to their past appearances, but with altered upgrades. In particular, the new Proximity Flare upgrade for the Remote Detonation mod provides a visible cue when an enemy can be hurt by the detonation, making it easier to use overall.

It should be noted that the weapon's ammo capacity is rather low, meaning that it should be saved for either large clusters of weak enemies or larger, slower enemies in order to reduce the need for resupplies.

Forged in the depths of the Golgothan smelting pits, the Paingiver is a demonic weapon, built at the command of Deag Ranak to make the weak suffer. It is said that the cultist-engineers of Golgotha who designed it refused to rest until their work was finished, so motivated were they by the Hell priest's vision.

Remote Detonation
Functions similarly to its Doom (2016) equivalent, allowing rockets to be detonated manually while they are in flight. Effective at damaging enemies behind cover or are in a poor position to be hit directly, but caution is advised to avoid damaging yourself with your own rockets.
Lock-On Burst
Functions similarly to its Doom (2016) equivalent, enabling a lock-on function that fires in bursts of three guided rockets. Unlike its predecessor, the guided rockets do the same damage as single-fire rockets, making the lock-on burst immensely powerful.

Proximity Flare
Rockets will trigger a flare when they are near targets that will be damaged by the Remote Detonation, making it easier to use. The flare is recognizable by the blue glow it generates from the rocket's booster.
Concussive Blast
Remote Detonations now generate a large, non-damaging concussive blast that can make demons falter, interrupting their attacks.
Mastery - Explosive Array
If a rocket is detonated while Proximity Flare is active, three secondary explosives will activate to create a larger area of effect.
Mod is unlocked by killing a total of 60 monsters while Proximity Flare is active.

The rocket launcher is discovered by the Doom Slayer during the reveal of the Super Gore Nest level at QuakeCon 2018. It is found on the ground rather than being a floating green pickup.

The fins on the barrel of the rocket launcher seem to be inspired by the profile of the weapon's first-person view and pickup sprites in Doom 64, making this weapon's design one of several such references in Doom Eternal.