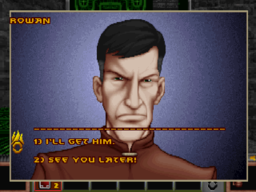 "Remember: his silence is golden."

Rowan is the first plot-important character met in Strife. He is encountered after escaping the top level of the sewage plant at the beginning of the game. When spoken to, he acknowledges the Strifeguy's potential and offers him money for a job, providing a crossbow to help out. This job is to assassinate Beldin in the Order's Sanctuary before he can reveal important information, and to bring the man's ring back as proof of the deed. Rowan has a total of 31 hit points, using the peasant actor, though it is game breaking to kill him at early points in the game.

After Beldin is killed and his ring brought back, Rowan states that Beldin was going to reveal the location of the Front, the rebel movement that is fighting against the Order, and offers the player a com unit and a chance for a world free of the Order's grasp. Accepting this offer allows BlackBird to be heard for the first time. Rejecting it instead causes Rowan to summon acolytes in floods, which will usually kill the player. The game also becomes unwinnable, since the base key is required to make further progress.

Though unused, there is a voice clip that suggests Rowan was intended to summon guards if the player continued to speak to him after taking the com unit.

In Strife: Veteran Edition, Rowan no longer sets off the alarm, simply telling the player to get lost if his offer is refused. It can be accepted again later if he is talked to again.

Rowan's resources all use the name "Retric," indicating that his character name was changed at some point during development. A similar name was retained for the character of Ketrick, however. The reason for this change is unknown.