Runaway is a single-level PWAD for Doom that was released in 1994. It was designed by Eric C. Reuter. 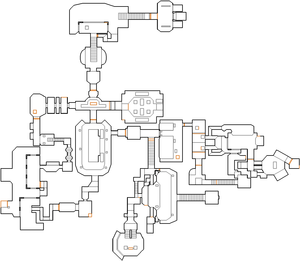 Map of Runaway
Letters in italics refer to marked spots on the map. Sector numbers in boldface are secrets which count toward the end-of-level tally.

A stimpack (Thing 53), two medikits (Things 21 and 55), and three things with undefined type 0 (Things 81, 82 and 83) have no flags set for any of the three difficulty classes, so they do not actually appear on the level.

The yellow key, which is required in order to complete the level, is not present on easy skill, making the level impossible to complete on this skill.