This level occupies the map slot S1M1. For other maps with a non-standard slot, see Category:Non-standard map slots.

S1M1: Forgotten Catacombs is the first map in the Breakup From Hell episode of Splatterhouse 3D. It was designed by Mike MacDee (Impie). 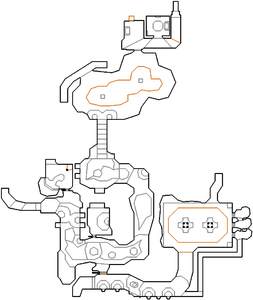 Map of Forgotten Catacombs
Letters in italics refer to marked spots on the map. Sector, thing, and linedef numbers in boldface are secrets which count toward the end-of-level tally.

This is one of the smallest maps in the game, an S-shaped cavern lined with cages and spooky side-chambers, and populated with a handful of small ghoul hordes. After climbing the small flight of stairs at the end of the cavern, Rick will encounter two Topheavy Demons as a miniboss. Killing both opens the door to one last ghoul horde guarding Jenny's Spirit and the exit switch.