SQUARES is a single-level mod for Doom II by Costa Lappas, released March 26, 1995. It is significant for being one of the first slaughtermaps; both the author and retrospective /idgames commentary note its exceptional difficulty, relative to a typical mod of the era. 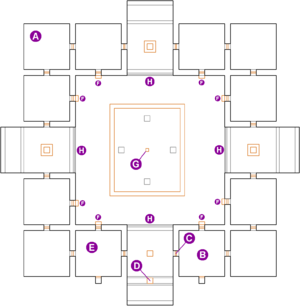 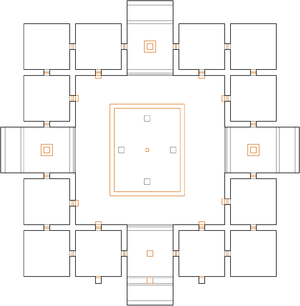 Map of SQUARES
Letters in italics refer to marked spots on the map. Sector numbers in boldface are secrets which count toward the end-of-level tally.

In 1995 this would have been considered a concept map to some degree, back before editors had polygon templates and drag-and-drop copypasting. It consists of sixteen square rooms tessellated around a larger central square. Each corner room contains a megasphere, all hitscan weapons, shells, and bullets. At each of the four compass directions lies a heavy weapon on a carpet of ammo, but attached to a trap unleashing formations of shotgun guys, barons, and pain elementals, with arch-viles capering in a cage behind. The trap will also open a broad window into the central chamber (H), exposing you to spiderdemon fire. Interposing rooms are packed with a single type of monster apiece (in all, fourteen of Doom II's twenty species are represented). Each group's population increases with skill level.

There are no health pickups apart from the megaspheres. Once you have the red key, however, the worst is over (bosses and arch-viles notwithstanding) because everyone else can be slain from behind locked doors or by corner-hiding if needed.

Arm yourself at the start point (A). Proceed clockwise through the squares to a group of Wolfenstein SS (B), where the red key is hidden behind the south wall. Along the way you will encounter, in order: demons, a plasma gun (with trap as above), arachnotrons, a supply room as above, revenants, a rocket launcher (with trap as above), heavy weapon dudes, and another supply room.

Proceed west through a red door (C), where you will find a BFG9000. Picking it up triggers the window and reveals the blue key (D), which is itself trapped as above (lost souls replace shotgun guys).

Westward through another red door is a room of arch-viles (E); the yellow key is hidden behind its south wall. You can now reach the exit in the very center of the map, first by passing through one of eight blue doors in the single-monster rooms (F), then opening the black-paneled central structure which is a yellow door. The latter action releases a wave of cyberdemons, several invulnerability and partial invisibility powerups, and four sniper monsters atop columns (imps on skill levels 1 and 2, heavy weapon dudes on skill 3, arch-viles on skill 4 and 5). Pressing any skull switch on the red pillar (G) ends the level.

You can continue around clockwise back toward the start room, which brings you consecutively to a fourth supply room, mancubi, another rocket launcher room, and imps.

Due to the lost soul limit, pain elementals collectively can attack only a few times on skill 3, and not at all on skill 4 or 5, until the blue key trap is cleared.

Cyberdemon rockets do not clear the windowsills unless fired from the opposite side of the chamber. When they awaken, grab an invulnerability and either backtrack to a blue door or arch-vile jump through a window. You can then attack without retaliation (assuming the spiderdemons are all dead and you stand at least 1024 units from the nearest sniper).

This data was last verified in its entirety on March 5, 2016.

This mod is stored in the file 1SQUARES.WAD, which is 89,234 bytes in size. It contains 11 entries and has the following hashes:

SQUARES was later used as a base for the much larger Deus Vult.