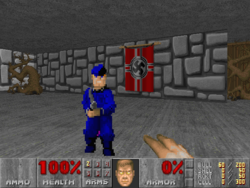 An SS Nazi in Level 31: Wolfenstein, in Doom II: Hell on Earth. If you look in between its legs, you will notice magenta pixels instead of the expected background. 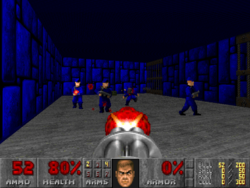 More SS officers, in action.
"You wonder who the inmates of this corner of hell will be."
― Intermission

The Wolfenstein SS (also referred to as the SS Nazi in DeHackEd) is a Nazi Schutzstaffel officer in blue uniform originally from Wolfenstein 3D, who makes an appearance in the secret levels of Doom II, which are re-creations of levels from Wolfenstein 3D. The SS officer appears as a blond, blue-eyed, square-jawed man wearing coveralls and a sidecap, and carries a submachine gun. When wounded, the Wolfenstein SS sounds like the former humans.

The SS Nazi inhabits only two maps released by id Software, the Doom II levels MAP31 and MAP32, and is furthermore absent from the latter on the "I'm too young to die" and "Hey, not too rough" skill settings. The SS officer is not mentioned in the Doom II instruction manual, presumably because his presence is an Easter egg.

The Wolfenstein SS is also present in the Final Doom data files, but is unused in all included levels.

The SS Nazi attacks by firing two bullets at a time, which are slightly less powerful than the player's bullet; like the heavy weapon dude, he fires repeatedly as long as his target is in sight. When killed, the Nazi drops a clip containing five bullets (or 10 on the "I'm too young to die" and "Nightmare!" skill settings). If he subsequently respawns or is resurrected, the clip remains; note however that no official id Software map contains both Nazis and arch-viles.

Wolfenstein 3D did not feature multiplayer or monster infighting, and as a result, all enemies encountered in-game only had front-facing graphics for attacking. Id Software's artists did not bother to make new attacking graphics for the other angles when they converted the SS Nazi's graphics to Doom II, so the SS Nazi always appears to face the player when firing, no matter where its actual target is. This can be confusing because the Nazis are just as likely to engage in infighting and killing each other as the former humans are. A fix for this technical limitation is available in the form of the Doom Minor Sprite Fixing Project, which also fixes issues (such as offsets) with other NPCs.

In Wolfenstein 3D itself, the SS Nazi is a feared marksman whose high rate of fire, accuracy, and large hit point total force the player to take care when fighting them. In Doom II, on the other hand, his stats aren't as impressive, turning him into a somewhat weaker counterpart of the heavy weapon dude, with fewer hit points and a slower rate of fire.

Although a single SS Nazi at close range can inflict significant damage (its rate of fire is about a third that of a heavy weapon dude), his main distinguishing feature is now its inaccurate aim, which sometimes allows a skilled player to clear a good part of a large room without even pulling the trigger, due to infighting, especially considering the way the monster is grouped in the secret levels of Doom II.

If the chaingun is used against a group of SS Nazis on the "Hey, not too rough", "Hurt me plenty", or "Ultra-Violence" skill levels, the player should watch his character's bullet stock carefully, since one is usually expending at least five bullets for every five-bullet clip recovered. The plasma gun dispatches Nazis fairly rapidly, while a single shotgun blast is often fatal. However, a chainsaw can be reasonably useful against the monster, but only at corners or narrow rooms and dead ends, because of its hitscan attack.

The Doom engine considers SS Nazis as tall as former humans and the player. However, the Nazis appear to be shorter on the screen because their sprites are unchanged in size from the originals from Wolfenstein 3D. This is likely because in Doom, Doomguy's point-of-view is at head-level, as opposed to Wolfenstein 3D's chest-level view.

The monster's alert and death sounds are spoken in German. When encountered, they say "Schutzstaffel!", identifying themselves as members of the SS; literally, "protection squad". When killed, they yell "Mein Leben!", a popular line from Wolfenstein 3D that means "My life!". The sounds have also been re-recorded for Doom. In the 2019 Unity port, their wake-up sound has been changed to "Schutzkämpfer!" ("protection warrior") so as to avoid directly referencing Nazi Germany.

The Schutzstaffel (commonly known as the SS) was a notorious paramilitary organization active during Hitler's tenure in Germany, responsible for a large part of the war crimes committed by the regime.

In the IWADs the Wolfenstein SS is first encountered on these maps per skill level:

The IWADs contain the following numbers of Wolfenstein SS per skill level:

Of the maps covered on the Doom Wiki, the following have the highest numbers of Wolfenstein SSs in single-player: