STONES.WAD is a single-level PWAD designed by Michael Kelsey. It is notable for being perhaps the first "serious" third-party Doom level ever created (the earlier releases were clearly marked as editing prototypes, or had their architecture deliberately simplified for lack of a reliable node builder). The text file provides no canonical name for the map.

Although the idgames package is dated April 17, 1994, this level was discussed on alt.games.doom at least as early as March 29, before the final version of DEU 5.0 had been completed. The time stamp on the WAD itself is March 26. 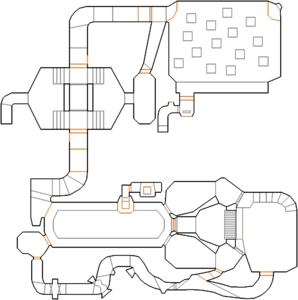 Map of STONES.WAD, E1M1
Letters in italics refer to marked spots on the map. Sector numbers in boldface are secrets which count toward the end-of-level tally.

Head up and down the stairs towards the room to the east, and grab the yellow key. Open the wall to your north, destroy both of the barrels in your path, and go east outside. Open the yellow door at the south and flip the switch in the next room.

* The vertex count without the effect of node building is 560.