STR03: Swamp (Stronghold: On the Edge of Chaos)

This level occupies the map slot STR03. For other maps with a non-standard slot, see Category:Non-standard map slots.

STR03: Swamp is the third map of Stronghold: On the Edge of Chaos. It was designed by Daniel Gimmer (Tormentor667) and uses a custom music track.

This level uses the "Deadline" mode, where the objective is to prevent any demons crossing the deadline. 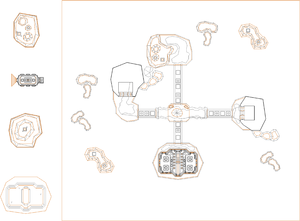 Map of Swamp
Letters in italics refer to marked spots on the map. Sector, thing, and linedef numbers in boldface are secrets which count toward the end-of-level tally.

You start in a building at the south end of the map, which contains the deadline and all the item pads. This level contains a large cross-shaped bridge over an acid pit - falling into the acid is instantly lethal and will cost you a life.

Blood demons should be prioritized whenever they spawn; they are just as fast as regular demons but have twice as much health. When rocket zombies spawn, watch out for them but note that they will often kill themselves and other monsters with their attacks.

A shotgun can be found on a rock in the center of the level.

* The vertex count without the effect of node building is 3807.