STR04: Asteroid (Stronghold: On the Edge of Chaos)

This level occupies the map slot STR04. For other maps with a non-standard slot, see Category:Non-standard map slots.

STR04: Asteroid is the fourth map of Stronghold: On the Edge of Chaos. It was designed by Daniel Gimmer (Tormentor667) and uses a custom music track.

This level uses the "Deadline" mode, where the objective is to prevent any monsters crossing either deadline. 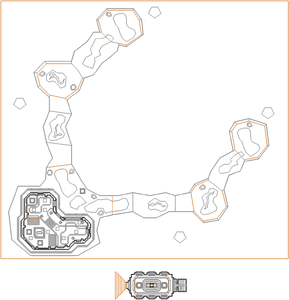 Map of Asteroid
Letters in italics refer to marked spots on the map. Sector, thing, and linedef numbers in boldface are secrets which count toward the end-of-level tally.

You start in a building with two deadlines on your left and right - both must be protected. The weapon, ammo and health pads are found inside the building, while the powerup pad is just outside. Use caution when traversing the asteroid, as falling off results in instant death and the loss of a life.

Blood demons are an obvious threat due to their speed and health, but watch out for catharsi as well - they fire a spread of projectiles and leave behind detonators when they die, which can be hard to avoid but will also injure monsters.

A shotgun and shells can be found just outside the building.

* The vertex count without the effect of node building is 2484.