STR06: Downtown (Stronghold: On the Edge of Chaos)

This level occupies the map slot STR06. For other maps with a non-standard slot, see Category:Non-standard map slots.

STR06: Downtown is the sixth map of Stronghold: On the Edge of Chaos. It was designed by Daniel Gimmer (Tormentor667) and uses a custom music track.

This level introduces the "Core" mode, where the objective is to protect a computer core against waves of enemies. 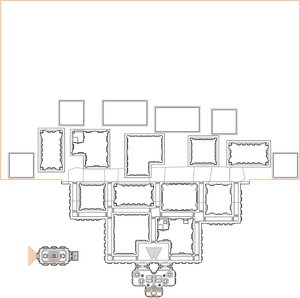 Before the level starts, you will be briefed by Lt. Carmack on the essentials of core defense. As the level starts, the core is in a room behind you which has two entrances - as there are more monsters here than in previous levels, it is advisable to place sentry turrets and barriers at these entrances to hold back any enemies that pass you. All four item pads can be found in the core room, and a second ammo pad can be found on a ledge near the center of the level, accessed via a lift.

Although demons are the fastest enemies in this level, they are not as much of a threat as in Deadline levels because they must get close to the core to damage it. The final wave involves a large number of suicide bombers - they are weak and explode when killed, so the rocket launcher and plasma rifle are very effective against them.

A shotgun can be found in front of you at the start of the level.

* The vertex count without the effect of node building is 4918.