STR07: Sandstorm (Stronghold: On the Edge of Chaos)

This level occupies the map slot STR07. For other maps with a non-standard slot, see Category:Non-standard map slots.

STR07: Sandstorm is the seventh map of Stronghold: On the Edge of Chaos. It was designed by Ronald Lubbelinkhof (Dutch Devil) and Daniel Gimmer (Tormentor667), and uses a custom music track.

This level uses the "Core" mode, where the objective is to prevent demons from attacking and destroying a computer core. 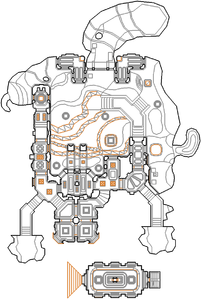 Map of Sandstorm
Letters in italics refer to marked spots on the map. Sector, thing, and linedef numbers in boldface are secrets which count toward the end-of-level tally.

Some barrels have been placed in the level and can be blown up to kill some enemies; the narrow paths and corridors provide an opportunity to use portable barrels and barrier kits. Watch out for the dune warriors that appear on wave seven; they can disappear when injured, then re-appear without warning and fire rockets at you.

The weapon, ammo and health pads are found inside a blue room at the south end of the building, while the powerup pad is found outside in a pool of water by the steps. A shotgun and shotgun shells can be found by the north gate.

* The vertex count without the effect of node building is 4569.