STR08: Tropical Paradox (Stronghold: On the Edge of Chaos)

This level occupies the map slot STR08. For other maps with a non-standard slot, see Category:Non-standard map slots.

STR08: Tropical Paradox is the eighth map of Stronghold: On the Edge of Chaos. It was designed by Paul DeBruyne (skillsaw) and uses a custom music track.

This level uses the "Core" mode, where the objective is to prevent monsters from destroying a computer core. 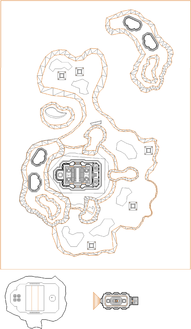 Map of Tropical Paradox
Letters in italics refer to marked spots on the map. Sector, thing, and linedef numbers in boldface are secrets which count toward the end-of-level tally.

You start inside a building in the center of an island, which contains the core and all the item pads; there are two entrances to the north and south that monsters will use to reach the core. A shotgun and shotgun shells are located in front of player one as the level starts.

This level involves combat with a wide range of monsters, finishing with cyberdemons and hectebi. You can use the rocket launcher liberally in this level as you are supplied with many rockets; the plasma repeater you receive in wave eight can make short work of crowds and lone enemies, but it needs time to spin up and spin down and firing it continuously will cause it to overheat. On the final wave, prioritize the cyberdemons as they can reach the core and destroy it very quickly.

* The vertex count without the effect of node building is 4398.