STR09: Volcanic Installation (Stronghold: On the Edge of Chaos)

This level occupies the map slot STR09. For other maps with a non-standard slot, see Category:Non-standard map slots.

STR09: Volcanic Installation is the ninth map of Stronghold: On the Edge of Chaos. It was designed by Joshua O'Sullivan (Dragonfly), Gianluca Cilento (Remmirath) and Daniel Gimmer (Tormentor667), and uses a custom music track. 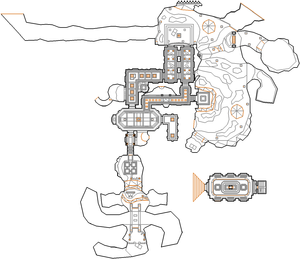 Map of Volcanic Installation
Letters in italics refer to marked spots on the map. Sector, thing, and linedef numbers in boldface are secrets which count toward the end-of-level tally.

As soon as the level starts, head across the bridge to collect a backpack and shotgun then go north to find the item pads, which hold ammo as well as a rocket launcher and chaingun; from here, head north to reach the core room.

Monsters will spawn from two burning caverns on the east side of the level; they will then head west until they enter the building, following three wide corridors to reach the core. If possible, destroy as many enemies as possible before they exit the burning caverns; once they emerge from the caverns they will be able to spread out. The BFG9000 is best used outdoors, while the plasma repeater works well in the corridors. Be ready to use powerups on the final wave to contain the large number of monsters

A plasma rifle can be found in a cavern due north of the core. Step through the door north-east of the core, then squeeze through the holes in the left-hand wall to enter the cavern.

A super shotgun can be found at the bottom of the slope that monsters emerging from the north-east cavern will walk down.

* The vertex count without the effect of node building is 4839.