STR12: Dangoo Desert (Stronghold: On the Edge of Chaos)

This level occupies the map slot STR12. For other maps with a non-standard slot, see Category:Non-standard map slots.

STR12: Dangoo Desert is the twelfth map of Stronghold: On the Edge of Chaos. It was designed by Björn Ostmann (Vader) and uses a custom music track.

This level uses the "Deadline" mode, where the objective is to prevent any monsters crossing any of the deadlines. 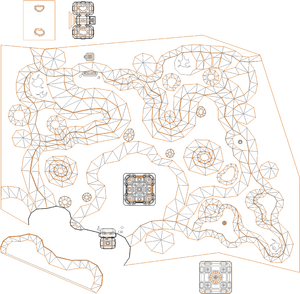 Map of Dangoo Desert
Letters in italics refer to marked spots on the map. Sector, thing, and linedef numbers in boldface are secrets which count toward the end-of-level tally.

You begin inside a building near the center of the level - the deadlines are the north and east entrances to this building. There are four item pads on a walkway inside the building - step on the gray jump pad in the middle of the building and it will boost you up to the walkway.

Monsters will initially spawn in the north-east corner of the level and follow the path east and south until they reach open ground, before heading south-west to reach the building. From wave four monsters will also start spawning in the north-west corner of the level (heading east and south, and from wave eight they will also spawn in the south-east corner (heading north-west and west).

Use caution when dealing with spectres; the sandstorm can make it difficult to see them at a distance. Waves nine and ten include a demolisher; this variant of the spiderdemon uses twin chainguns and a BFG9000, so ensure you have cover available before fighting it.

A shotgun and two boxes of shotgun shells can be found at the east entrance to the starting building.

South-west of the starting building is a door which is partially open. Behind it is a pad holding a marine reinforcements powerup - this pad will also spawn a berserk pack on wave five and a supercharge on wave nine.

A megaarmor, energy cell pack and another shotgun can be found at the west end of the map, behind a large rock.

A chaingun can be found near a closed door by the north-west spawn point.

Monsters can get stuck in the north-east spawn point, making it easy to kill them before they reach the deadline; this is more likely to occur with spiderdemons and demolishers due to their size. Demon-type enemies can also get stuck on the edges of slopes.

* The vertex count without the effect of node building is 5216.