STR14: Orbit (Stronghold: On the Edge of Chaos)

This level occupies the map slot STR14. For other maps with a non-standard slot, see Category:Non-standard map slots.

STR14: Orbit is the fourteenth map of Stronghold: On the Edge of Chaos. It was designed by Daniel Gimmer (Tormentor667) and uses a custom music track. 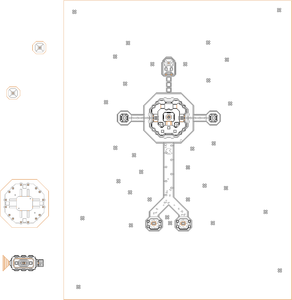 Map of Orbit
Letters in italics refer to marked spots on the map. Sector, thing, and linedef numbers in boldface are secrets which count toward the end-of-level tally.

Initially you will be able to keep the monsters trapped on the bridge leading to the deadline building using the rocket launcher; you will be generously supplied with rockets for much of this level, but watch out for projectiles heading your way. Make sure to lay mines along both pathways to the deadline when you can, as once enemies start spawning at the end of the bridge you will not be able to keep them from splitting up. Consider bringing invulnerability items into this level to deal with the cybruisers and pyrodemons; they can easily kill inexperienced players.

A shotgun, rocket launcher and two boxes of shotgun shells can be found by the deadline building's entrance.

Just before wave six starts, two closets containing a chaingun and a super shotgun will open next to the deadline.

* The vertex count without the effect of node building is 7246.