STR18: Delta Bunker (Stronghold: On the Edge of Chaos)

This level occupies the map slot STR18. For other maps with a non-standard slot, see Category:Non-standard map slots.

STR18: Delta Bunker is the eighteenth map of Stronghold: On the Edge of Chaos. It was designed by James Cresswell (Phobus) and Gianluca Cilento (Remmirath), and uses a custom music track.

This level uses the "Limit" mode, where the objective is to prevent too many monsters reaching the deadlines. 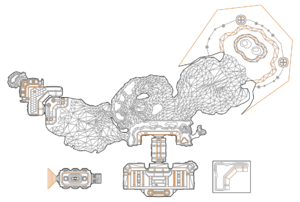 Map of Delta Bunker
Letters in italics refer to marked spots on the map. Sector, thing, and linedef numbers in boldface are secrets which count toward the end-of-level tally.

All players begin in a large room; the deadlines are the two green pads behind you, and a maximum of 100 monsters can be allowed to pass through them. The weapon and powerup pads will be on your right, and the ammo and health pads will be on your left; you will need to return here between waves to restock and collect new weapons.

Unlike previous levels, no extra weapons have been left for you to collect; kill some of the shotgun guys in the first wave as quickly as possible and collect their shotguns. Watch out for the archons of Hell that appear in wave seven; they can fire fast-moving meteors that deal heavy damage if not dodged, although they can injure other monsters.

The teleport destinations in this level are not flagged to appear on Ultra-Violence or Nightmare skill levels; as a consequence, players are not sent to jail when they run out of lives on those skill levels and instead respawn at the start point. In multiplayer, this bug also prevents players who have been jailed for being late to the game from leaving the jail by using an extra life item.