STR19: Tarstone Fortress (Stronghold: On the Edge of Chaos)

This level occupies the map slot STR19. For other maps with a non-standard slot, see Category:Non-standard map slots.

STR19: Tarstone Fortress is the nineteenth map of Stronghold: On the Edge of Chaos. It was designed by Björn Ostmann (Vader) and uses a custom music track. 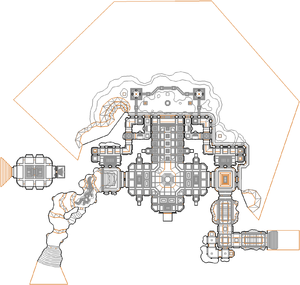 Map of Tarstone Fortress
Letters in italics refer to marked spots on the map. Sector, thing, and linedef numbers in boldface are secrets which count toward the end-of-level tally.

All players start in a cross-shaped hall; the deadline is the red flesh-gate south of the start point, and you must not allow more than 50 monsters to pass through it. There are six item pads - one weapon, one powerup, two ammo and two health - in the central hall, and a second powerup pad in an outdoor area to the north. From here you can head south-west or south-east to find lifts leading up to chambers with another health and ammo pad.

The narrow passages corral monsters, making them easier to hit with landmines and the rocket launcher; however, they can make it harder to avoid incoming attacks, particularly from cyberdemons and bruiser demons.

A rocket launcher can be found in a room above the central hall, overlooking the west spawn point. You can get there using the lift south-west of the outdoor area.

* The vertex count without the effect of node building is 8793.