STR20: Dusk (Stronghold: On the Edge of Chaos)

This level occupies the map slot STR20. For other maps with a non-standard slot, see Category:Non-standard map slots.

STR20: Dusk is the twentieth map of Stronghold: On the Edge of Chaos. It was designed by KeksDose and uses a custom music track. 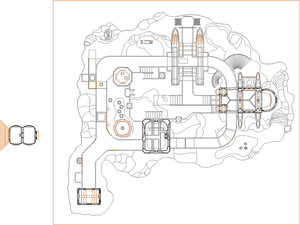 Map of Dusk
Letters in italics refer to marked spots on the map. Sector, thing, and linedef numbers in boldface are secrets which count toward the end-of-level tally.

This level focuses on fast-moving enemies; ensure that all paths are covered and be ready to return to the deadline if the alarm sounds. Consider placing a couple of sentry turrets near the deadline to eliminate enemies that get too close.

A shotgun can be found in the deadline building along with three piles of shotgun shells.

Use caution around the outer areas of the level, as falling off the edge of the map will result in instant death and the loss of a life.

Leave the deadline building and turn right, then turn right again and jump over the blue sloped sector in front of you. You will land on a brown floor with an octagonal hole - drop through the hole to land in a room with a chainsaw and two rockets.

A marine reinforcement powerup can be found on top of the archway in front of the deadline building. Ride the lifts either side of the archway up, then jump from the balconies to reach the powerup.

At the top of the slope near the north-west corner of the walkway is a depression in the floor. Step on it to be carried down to a hidden room containing a computer area map.

All six spawn points are located inside the jail, only with two deathmatch-only super shotguns.

* The vertex count without the effect of node building is 7286.