STR21: Overmind (Stronghold: On the Edge of Chaos)

This level occupies the map slot STR21. For other maps with a non-standard slot, see Category:Non-standard map slots.

STR21: Overmind is the twenty-first map of Stronghold: On the Edge of Chaos. It was designed by Daniel Gimmer (Tormentor667) and uses a custom music track.

This level introduces the "Overmind" mode, where the objective is to destroy a single large opponent before it destroys the level's power cores. 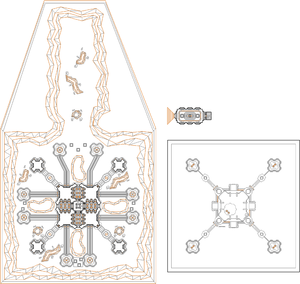 Map of Overmind
Letters in italics refer to marked spots on the map. Sector, thing, and linedef numbers in boldface are secrets which count toward the end-of-level tally.

Before this level starts, Lt. Carmack will brief you about the Overmind, a large gray demon resembling the Cycloid Emperor from Duke Nukem 3D - your objective is to kill this monster before it destroys the eight power cores placed on pylons around the main building. The Overmind can breathe fire and launch catharsi projectiles from its arm cannons; players who get too close will also be damaged by its stomping feet. The Overmind's health changes depending on how many players are facing it - 20,000 for one player, up to 60,000 for eight players - and its remaining health is displayed as a percentage at the bottom of the screen. Every time the Overmind's health is reduced by 10% the next wave will start, whether or not the previous wave has been completed.

The Overmind starts at the north end of the level and heads south until it reaches the main building; it then proceeds in a clockwise direction around the building until it returns to the north side. On each wave, monsters will spawn by the north, south-west and south-east sides of the building - they usually target players but can also target the power cores if no other targets are available. When fighting the Overmind solo, you will need powerups such as quad damage and time freeze to slay it before it can reach all the cores. Ignore the other monsters as much as possible; they are intended to distract you from the Overmind.

Completing this level will award 2,000 bonus credits and unlock the fifth tier of missions in the main hub.

From its starting point the Overmind can target the cores on the north, east and west sides of the main building. If it destroys all these cores before it reaches the main building, it will get stuck on the building's north side as it attempts to find a path to the south cores, making it very easy to kill.

There are two start points for players five to eight, causing voodoo dolls to appear when five or more players are present in the level.

* The vertex count without the effect of node building is 10190.