STR22: Locus of Pestilence (Stronghold: On the Edge of Chaos)

This level occupies the map slot STR22. For other maps with a non-standard slot, see Category:Non-standard map slots.

STR22: Locus of Pestilence is the twenty-second map of Stronghold: On the Edge of Chaos. It was designed by Joshua O'Sullivan (Dragonfly) and Björn Ostmann (Vader), and uses a custom music track. 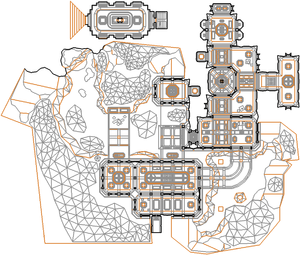 Map of Locus of Pestilence
Letters in italics refer to marked spots on the map. Sector, thing, and linedef numbers in boldface are secrets which count toward the end-of-level tally.

You start in a room that contains all four item pads; head straight forward down some steps to a bridge and follow it to enter the main building. Head north from here to enter a room with a power reactor; climb the stairs in this room to find another ammo and health pad, or step into the green teleporter next to the deadline to find a chamber with a third ammo pad and a chaingun. You can also find a shotgun and shotgun shells behind a crate in the reactor room.

Monsters will spawn from a red rock area in the north-west corner of the level; they will then head south and east to enter the main building, before heading north past the reactor to the deadline. The monsters have to pass through some narrow doorways and obstacles to reach their goal; try using landmines or other explosive weapons to kill the crowds quickly, which include a number of fast-moving enemies such as cyberdemons and arch-viles.

Turn right as you leave the starting room to find a chainsaw.

* The vertex count without the effect of node building is 9366.