STR23: Bipolar Bunker (Stronghold: On the Edge of Chaos)

This level occupies the map slot STR23. For other maps with a non-standard slot, see Category:Non-standard map slots.

STR23: Bipolar Bunker is the twenty-third map of Stronghold: On the Edge of Chaos. It was designed by Paul DeBruyne (skillsaw) and uses a custom music track.

This level uses the "Milestone" mode, where the objective is to prevent monsters passing through a series of milestones on their way to the deadline. 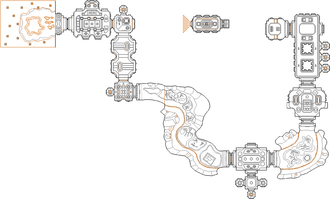 Map of Bipolar Bunker
Letters in italics refer to marked spots on the map. Sector, thing, and linedef numbers in boldface are secrets which count toward the end-of-level tally.

This level is functionally similar to STR11: Tunnel, consisting of one long passage. Monsters will spawn from a magma pool at the west end of the tunnel and follow it until they reach the deadline, which is west of the players' starting points at the east end of the tunnel. Along the way the monsters will pass through three milestones, which resemble doorways with gray striped borders - you must keep the monsters from passing through these milestones. Each time the monsters breach a milestone, they will start spawning near that location.

The starting room contains all four item pads as well as a shotgun, super shotgun, two backpacks and four boxes of shotgun shells. There are also three numbered teleporters which will put you near each milestone - use teleporter #1 to quickly get to the monsters' starting point. Each time the monsters breach a milestone, its corresponding teleporter will be sealed.

As with Deadline levels, focus on the fastest enemies first before they get too close to the milestones; have the BFG9000 received on wave eight ready to kill the cyberdemons that will appear. Watch out for the Hades elemental on wave seven, as the spheres it fires are classed as monsters and can also breach milestones.

* The vertex count without the effect of node building is 10188.