STR24: Aurora Emitter (Stronghold: On the Edge of Chaos)

This level occupies the map slot STR24. For other maps with a non-standard slot, see Category:Non-standard map slots.

STR24: Aurora Emitter is the twenty-fourth map of Stronghold: On the Edge of Chaos. It was designed by Paul DeBruyne (skillsaw) and uses a custom music track.

This level uses the "Limit" mode, where the objective is to prevent more than 100 monsters crossing the deadline. 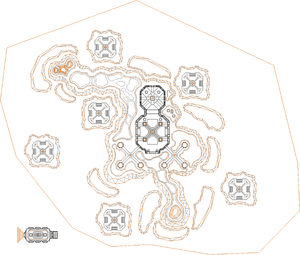 Map of Aurora Emitter
Letters in italics refer to marked spots on the map. Sector, thing, and linedef numbers in boldface are secrets which count toward the end-of-level tally.

Monsters will initially spawn from two magma pools on the south and north-west sides of the level, but from wave six the two green light beams near the building will turn red and monsters will start spawning from these as well. In the early waves, focus on the monsters spawning from the south area first as they have a shorter route to the deadline; later on, stay near the deadline and attack the monsters as they congregate by the light-beam inside the building. The main building has three entrances and monsters will use all of them.

A shotgun and two stacks of shotgun shells can be found at the bottom of the stairs leading to the deadline, while a chaingun and a box of bullets can be found outside at the north side of the building.

Do not step into the green/red beams; this will result in instant death.

* The vertex count without the effect of node building is 8213.