STR25: Eye of the Storm (Stronghold: On the Edge of Chaos)

This level occupies the map slot STR25. For other maps with a non-standard slot, see Category:Non-standard map slots.

STR25: Eye of the Storm is the twenty-fifth map of Stronghold: On the Edge of Chaos. It was designed by Daniel Gimmer (Tormentor667) and uses a custom music track.

This level uses the "Overmind" mode, where the objective is to kill a single large enemy before it destroys all the level's computer cores. 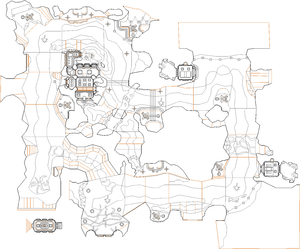 Map of Eye of the Storm
Letters in italics refer to marked spots on the map. Sector, thing, and linedef numbers in boldface are secrets which count toward the end-of-level tally.

Similar to STR21: Overmind, this level requires you to slay a single Overmind before it destroys seven computer cores placed throughout the level. The Overmind will start at the south-west corner of the level and head north, following the canyon in a clockwise direction; smaller monsters will spawn from five points around the canyon marked by magma pools.

Players will start inside and around a building near the middle of the level, which contains all the item pads and connects with different areas of the canyon so you can quickly resupply before returning to the Overmind. There are also two smaller structures on the east side of a canyon, each of which contains an ammo and a health pad as well as a one-way teleporter that will return you to the main building.

A shotgun and two stacks of shotgun shells are placed in front of player one as the level starts; a second shotgun can be found on the upper level of the main building next to player five. An armor pickup can be found on the north side of the canyon, near the third core.

Leave the main building by the south doors. From here you can head south and west down a passage to find a super shield powerup, or head south-east across a stream then north to find a portable super medikit.

* The vertex count without the effect of node building is 10110.