STR26: Deepspace 12 (Stronghold: On the Edge of Chaos)

This level occupies the map slot STR26. For other maps with a non-standard slot, see Category:Non-standard map slots.

STR26: Deepspace 12 is the twenty-sixth map of Stronghold: On the Edge of Chaos. It was designed by Daniel Gimmer (Tormentor667) and uses a custom music track.

This level introduces the "Goals" mode, where the objective is to prevent monsters destroying a series of targets placed throughout the level. 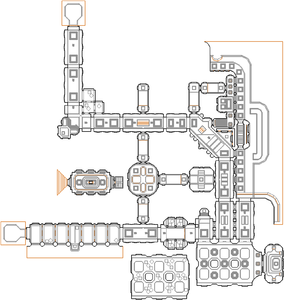 Map of Deepspace 12
Letters in italics refer to marked spots on the map. Sector, thing, and linedef numbers in boldface are secrets which count toward the end-of-level tally.

Before the level starts, Lt. Carmack will brief you on the essentials of Goals mode. There are five colored targets placed throughout the level; the mission will fail if they are all destroyed by the monsters. All players start in a room near the middle of the level that contains all the item pads, as well as three doorways that connect to the rest of the level; ammo and health pads can also be found up a staircase by the green goal, and in the room before the white goal.

On higher skill levels you will need to make use of powerups, as the weapons and ammo provided will not be strong enough to hold back the opposition. Save the more powerful weapons, such as the railgun, for the strongest enemies.

A shotgun can be found by the blue goal. You can also find a chaingun in a dead-end opposite the north passage from the starting room, and a chainsaw and armor in a room east of the starting area.

Completing this level will award 2,600 bonus credits and unlock the sixth tier of missions in the main hub.

* The vertex count without the effect of node building is 9847.