STR27: Cyclone (Stronghold: On the Edge of Chaos)

This level occupies the map slot STR27. For other maps with a non-standard slot, see Category:Non-standard map slots.

STR27: Cyclone is the twenty-seventh map of Stronghold: On the Edge of Chaos. It was designed by Daniel Gimmer (Tormentor667) and uses a custom music track.

This level uses the "Milestone" mode, where the objective is to prevent monsters crossing a series of milestones on their way to the deadline. 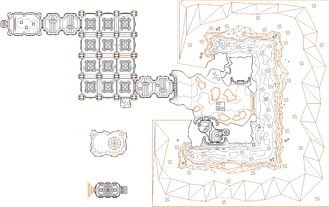 Map of Cyclone
Letters in italics refer to marked spots on the map. Sector, thing, and linedef numbers in boldface are secrets which count toward the end-of-level tally.

In this level, monsters will initially spawn from a magma crack at the south end of the level; they will then head east and north through an outdoor area, west through a large cavern then through a corridor and up a winding staircase before heading west to the deadline.

Players will start in the deadline room at the west end of the map; this room contains weapon, ammo and health pads as well as a teleporter leading to a room that contains a second ammo pad, and connects with the cavern and the monsters' first spawn point. If you walk through the door by the teleporter and turn left you can follow the ledge to a second health pad. There is also a weapon pad at the cavern entrance, a powerup pad by some crates inside the cavern, and an ammo and health pad in the corridor leading to the winding staircase.

A rocket launcher is placed on the ammo pad in the starting room, while a shotgun and shells can be found at the top of the winding staircase.

On the north side of the cavern is a sloped passage leading up to a ledge overlooking the outdoor area. Turn right when you reach the ledge and you can follow it to a super shield pickup.

The level contains two player seven starts, creating an unintended voodoo doll when there are seven or eight players in the level.

* The vertex count without the effect of node building is 11217.