STR28: Terrorforming (Stronghold: On the Edge of Chaos)

This level occupies the map slot STR28. For other maps with a non-standard slot, see Category:Non-standard map slots.

STR28: Terrorforming is the twenty-eighth map of Stronghold: On the Edge of Chaos. It was designed by Pyroscourge and uses a custom music track

This level uses the "Goals" mode, where the objective is to prevent monsters destroying targets placed around the level. 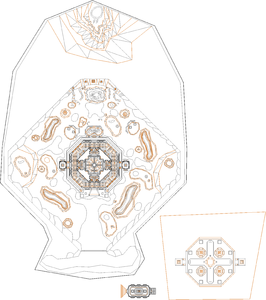 Map of Terrorforming
Letters in italics refer to marked spots on the map. Sector, thing, and linedef numbers in boldface are secrets which count toward the end-of-level tally.

All players start in the center of an octagonal building; the white goal is in the middle of the starting room, while the other four goals are found in the corridors outside. The starting room also contains all four item pads as well as a backpack, shotgun, super shotgun, chaingun and several boxes of bullets and shells. There are additional health and ammo pads at the entrance to the building, and behind two wall in the north-west and north-east areas of the level (along with another shotgun and super shotgun).

If you head north from the starting room you will find a teleporter that will send you to a fenced area with another weapon and powerup pad; flip any of the switches here to lower a wall and quickly reach the monsters' spawn points. There is a fenced walkway running around the outside of the building; at the ends of this walkway are teleporters that will put you by the entrance to the building, useful for intercepting monsters that are trying to get inside.

Monsters will spawn from two points at the north and head south-west or south-east around the building until they reach the entrance on its south side. After entering the building, monsters will head north-east or north-west through the corridors (attacking and destroying any goals they pass) until they reach the starting room where the white goal can be found. Use caution with the wickeds and pyrodemons, as they can attack the goals through the windows of the building.

Each time a goal is destroyed, the environment will change:

* The vertex count without the effect of node building is 13321.