STR29: Emerald Skies (Stronghold: On the Edge of Chaos)

This level occupies the map slot STR29. For other maps with a non-standard slot, see Category:Non-standard map slots.

STR29: Emerald Skies is the twenty-ninth map of Stronghold: On the Edge of Chaos. It was designed by Daniel Gimmer (Tormentor667) and uses a custom music track.

This level uses the "Limit" mode, where the objective is to stop too many monsters crossing the deadline. 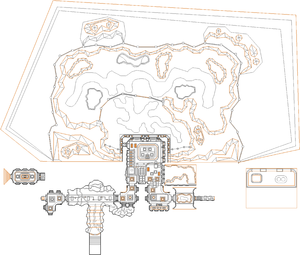 Map of Emerald Skies
Letters in italics refer to marked spots on the map. Sector, thing, and linedef numbers in boldface are secrets which count toward the end-of-level tally.

All players start at the north end of a building, in a room that contains all the item pads; there are two doors to the north that lead outside, and if you head south up the stairs (or use the jump pad) you will find a second ammo and health pad. The deadline is at the end of a passage in the south-east corner of the building, and no more than 30 monsters can be allowed to pass through it.

Monsters will spawn from several locations over the course of the level.

Use caution when fighting outside; it will get progressively darker with each wave and you may struggle to see oncoming enemies.

North of the rock tunnel is a ledge with two portable medikits.

Swim down to the bottom of the water pool at the north side of the outdoor area to find a morpher powerup.

By the doorway leading to the deadline are two brick archways. Look at the south side of the column between these archways to find a switch; flipping it will generate a five-digit code. This code can be used to open a door in the main hub leading to STR52: City of Silence - Apocalypse.

* The vertex count without the effect of node building is 7716.