STR30: Convulsion of Nature (Stronghold: On the Edge of Chaos)

This level occupies the map slot STR30. For other maps with a non-standard slot, see Category:Non-standard map slots.

STR30: Convulsion of Nature is the thirtieth map of Stronghold: On the Edge of Chaos. It was designed by Pyroscourge and Daniel Gimmer (Tormentor667), and uses the music track "". 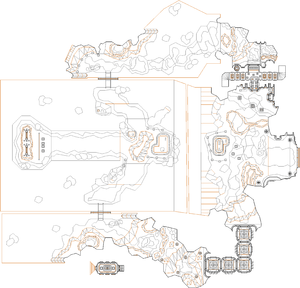 Map of Convulsion of Nature
Letters in italics refer to marked spots on the map. Sector, thing, and linedef numbers in boldface are secrets which count toward the end-of-level tally.

As the level starts you will see a striped line on the ground in front of you; this is the deadline and you must not allow more than 30 monsters to cross it. All four item pads can be found in this area along with a chaingun, rocket launcher, armor and health items; you will also find a shotgun and super shotgun further down the slope. There are more weapon, health and ammo pads on the east side of the level, and a second powerup pad can be found behind an open door on the northern-most path.

Monsters will spawn by a large archway on the east side of the level then head north or south along two long paths, congregating at the bottom of the slope leading to the deadline. This level includes both swarms of small monsters and large groups of powerful enemies, so use powerups and support items as needed.

Do not fall off the paths on the west or north sides of the level; this will result in instant death. This is especially likely to occur with pyrodemons, as their attacks push away targets.

Approach the bridge passing through the north ring but do not cross it; instead, walk south until you drop off the edge to land on a ledge with two portable medikits and a time freeze pickup.

* The vertex count without the effect of node building is 12399.