STR31: Black Gold (Stronghold: On the Edge of Chaos)

This level occupies the map slot STR31. For other maps with a non-standard slot, see Category:Non-standard map slots.

STR31: Black Gold is the thirty-first map of Stronghold: On the Edge of Chaos. It was designed by Paul DeBruyne (skillsaw) and uses a custom music track. 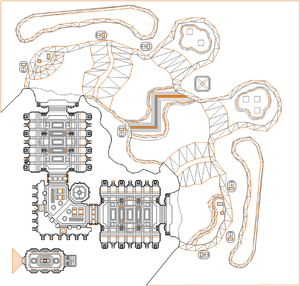 Map of Black Gold
Letters in italics refer to marked spots on the map. Sector, thing, and linedef numbers in boldface are secrets which count toward the end-of-level tally.

The core is in front of players one to five as the level starts, along with a shotgun, super shotgun, two backpacks and four boxes of shotgun shells. The four item pads can be found near the core, and additional ammo and health pads can be found in the two wide passages leading to the core. There are two teleporters in the north-west and south-east corners of the level that have a chaingun, rocket launcher and ammo next to them; use the teleporters to quickly return to the core building.

* The vertex count without the effect of node building is 10347.