STR32: Snake Corridors (Stronghold: On the Edge of Chaos)

This level occupies the map slot STR32. For other maps with a non-standard slot, see Category:Non-standard map slots.

STR32: Snake Corridors is the thirty-second map of Stronghold: On the Edge of Chaos. It was designed by Daniel Gimmer (Tormentor667) and uses a custom music track.

This level uses the "Limit" mode, where the objective is to stop too many monsters crossing the deadline. 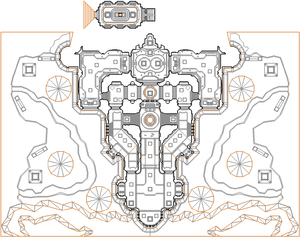 Map of Snake Corridors
Letters in italics refer to marked spots on the map. Sector, thing, and linedef numbers in boldface are secrets which count toward the end-of-level tally.

As the level starts, head up either of the green slopes in front of you to find a red pad; this is the deadline and you must not allow more than 100 monsters to reach it. Head south along a bridge to find health and ammo pads, as well as a weapon pad on a ledge that can be reached by jumping (it has a rocket launcher on it). Alternatively, if you climb the steps next to the deadline you can drop down to an area with more health, ammo and weapon pads as well as a shotgun; step on the gray jump pad in this room to reach a powerup pad.

In this level it is important to be aggressive and kill as many monsters as possible before they get into the passages; once there you are largely restricted to killing them one by one, and you risk being overwhelmed by their numbers. Remember to focus on weaker enemies first and be prepared to let some stronger monsters pass through the deadline. There are windows overlooking the outdoor areas and the passages leading to the deadline room; use these to your advantage.

Flying monsters can get stuck under the deadline platform, making them easy to kill.

* The vertex count without the effect of node building is 7595.