STR33: Antlion Nebula (Stronghold: On the Edge of Chaos)

This level occupies the map slot STR33. For other maps with a non-standard slot, see Category:Non-standard map slots.

STR33: Antlion Nebula is the thirty-third map of Stronghold: On the Edge of Chaos. It was designed by Björn Ostmann (Vader) and uses a custom music track.

This level uses the "Milestone" mode, where the objective is to stop monsters passing through a series of milestones on their way to the deadline. 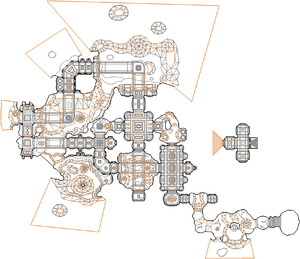 Map of Antlion Nebula
Letters in italics refer to marked spots on the map. Sector, thing, and linedef numbers in boldface are secrets which count toward the end-of-level tally.

Monsters will spawn from a cavern in the south-east corner of the map and follow a rock tunnel to enter the base - once inside, they will follow a single path up a series of bridges and ramps until they reach the top level and pass through the deadline. This map spans multiple levels and has overlapping bridges, so it is important to familiarize yourself with the layout.

All players start on the top level in front of the deadline. Head straight forward to find a chaingun and two boxes of bullets in front of a weapon pad; there are two numbered holes here that will let you drop straight down to the lower levels, but #3 will put you closest to the monsters' starting point.

A megaarmor can be found in the larger room north of the first milestone, while a backpack can be found just before it.

On the west side of the level is a switch that will temporarily activate a forcefield to the south. While active, the forcefield will damage or kill enemies trying to pass through it.

* The vertex count without the effect of node building is 8929.